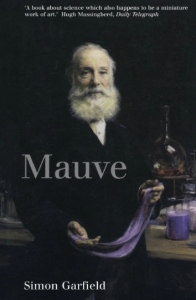 Another one of our occasional book reviews – Mauve: How One Man Invented A Colour That Changed The World by Simon Garfield (published by Faber and Faber, 2013).

William Perkins was a chemist in the 19th century who hoped to find a cure for malaria. He didn’t manage that but along the way he did invent the first aniline dye, a rich purple, in the 1856 when he was only 18. (So young that the patent rules of the time had to be changed to let him register his discovery). Mauve immediately became the fashionable colour and was popularised by Queen Victoria. (Incidentally, the Victorians pronounced it ‘morv’ rather than ‘mowv’.)The discovery of a purple dye in itself might not seem hugely important, but it was a development that had huge effects on industry, academia, politics, photography, medicine, warfare, forensic science… and now Perkins is largely forgotten.

It’s easy to take for granted the huge range of artificially created colours that we see everyday so this book offers an interesting chance to reflect on how different things were before their discovery. (And you might be interested to know that it doesn’t assume that the reader has any knowledge of chemistry. We were!). It’s interesting to speculate about whether the world would seem more drab without artificial colour, or would the existing natural colours have stood out and their existence valued more?