Do you remember Cecelia? The Dan Hillier print we bought a while ago? (Here is a link to the post about it). 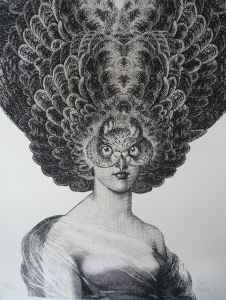 Well, we finally got round to taking her to the framing shop.

First step was to chose a mount – easier said than done. Our first thought was that it should be a pale grey, but in practice all the greys were too dark and actually looked more like blues against the print. Luckily the shop had a range of different colours: 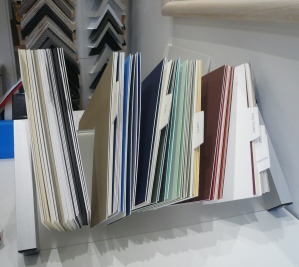 But even opting for white mean that there were still decisions to take – some of the whites looked too yellow or too pink against the print. And the one that was the brightest white…well, it looked too white! Eventually we chose the one on the left in this picture: 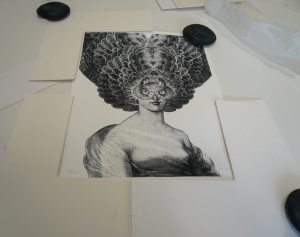 That one is called ‘French White’, which has a suitably sophisticated ring to it! (Please note that it is not Ice White, Goosedown, Polar White, Spanish White, Matte White, Igloo, Frost, Fairfield White, Cobblestone, Almond or Photo White – and those are just the ‘white’ colours from the same manufacturer. There are others, with different colours of white mount card!

But the colour of the card wasn’t the only decision to be made about the mount. We also had to decide whether to have the print window mounted, or float mounted. Window mounted is the more traditional of the two – the print sits behind the mount, which has a ‘window’ cut out so that the print can be seen through it. Float mounting puts the print on top of the mount so that the edge of the print is visible. It’s usually used with a box frame so that there is some physical depth to the finished picture. We went for window mounting for two reasons. One is that the edge of the print is just a straight cut and not particularly interesting in itself. The other is that Cecelia’s headress (or is it her hair? Or her feathers?) fills the top of the print and we didn’t want to take away from that affect. That’s also why we chose to have the mount go straight up to the edge of the image rather than leave a few millimetres  of the paper outside the print showing. The borders will be slightly narrower at the sides than they are at the top and the bottom.

So finally, the frame.  Once again, there was quite a choice: 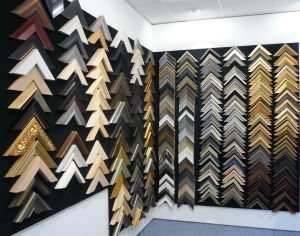 The plan was to get something plainish, but not too plain, with a silver-gilt colour. With some help we settled on this one:

So that’s all the decisions made and now we just have to wait 7-10 days until she is ready for collection. Thank you very much, Framework Picture Framers, for all your help and advice!