Embed from Getty Images
What? Who? Where?

Norton Folgate is an area to the north of Spitalfields in London with a fascinating history. In 1547 it became a ‘liberty’, which means that it was governed by its residents. The Liberty of Norton Folgate was ruled by 10 ‘Ancient Inhabitants’ – actually elected officials who could be either men or women. Their powers let them organise street lighting,  their own watchmen and initiatives to help the poor. They could even perform marriages and burials independently of the church, all of which was very forward thinking for the time. The Constable of the Liberty had a staff to symbolise the authority he wielded on behalf of the people – it’s London’s oldest staff of office. 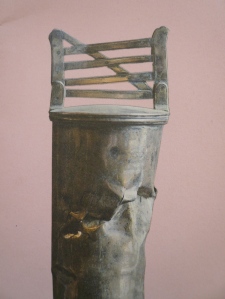 It’s thought that Shakespeare lived in the area briefly (the tax records indicate that he did) and Christopher Marlowe definitely lived there in the sixteenth century. In fact, he wrote at least part (if not all) of Doctor Faustus during that period. In the seventeenth century the area was settled by many Huguenot silk weavers and the industry first flourished and then declined.

Norton Folgate was also the site of the first stage production of Dicken’s work in 1837 (The Pickwick Club – actually produced before the author had finished writing it). The liberty continued until 1900 when the area became part of the Borough of Stepney under the LCC. It’s always been a mix of art and industry, residential and commercial occupancy.

So now to the problem. British Land, one of the largest property development and investment companies in the UK want to redevelop the area. Their plan is to demolish 72% of the buildings on the piece of land that they own, all of which is in a conservation area. In their place, they want to build a collection of office blocks 11 – 13 storeys high. If the plan goes ahead, not only will historically important buildings be lost, the character of the area will be destroyed. Forever.

The Spitalfields Trust (which has already saved the area once) is campaigning against British Land’s plan and has put forward an alternative redevelopment which would keep existing buildings and add new ones in a mix of traditional and contemporary styles.

Can we ask you a favour? Please visit The Spitalfields Trust website and then please consider writing to Tower Hamlets Council to object to British Land’s application (details of how to do this are on the site). The deadline for objections was in February, but letters and emails will be accepted right up until the Hearing of Application  which is likely to be in April. Please? Go on…