You probably know that we have a weakness for a tea towel – so we were delighted when this extra-special one arrived in the mail! Why is it extra-special? Well…

First of all it was sold to raise money for the Save Norton Folgate campaign. We’ve posted about Norton Folgate in the past here and here. (The latest is that the former Mayor of London’s decision to overrule Tower Hamlets council and allow the British Land development to go ahead has gone to a judicial review and a decision will be made very soon).

Secondly, the design is by Adam Dant – who is sometimes called ‘the 21st century’s Hogarth’. He creates large, intricate drawings that record and often satirize contemporary life. (He was the official artist of the 2015 General Election.) And as a Shoreditch  resident himself, he has keen interest in what happens in the area. The tea towel features a print of his work ‘The Curse of Norton Folgate’ (created especially for the Save Norton Folgate campaign), in which the animals that died in the fire at the East London Aquarium, Menagerie and Waxwork Museum in  1884 stalk the streets of Shoreditch delivering elaborate, theatrical curses to those who wish to despoil the Liberty of Norton Folgate.

They are surrounded by vignettes of the history of the area and portraits of famous residents: 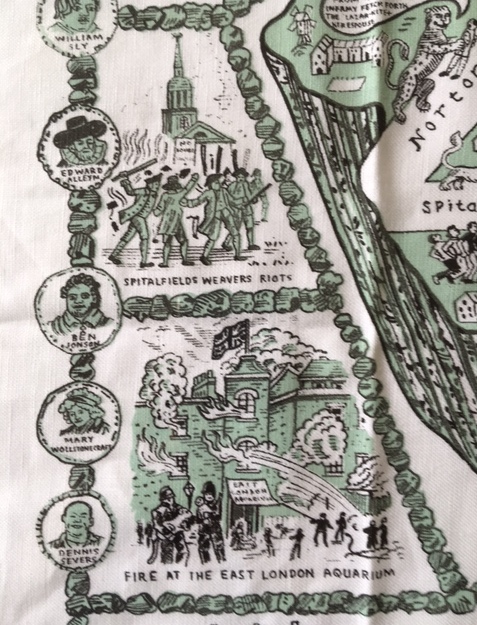 And the third reason it’s special? These tea towels were sold as a limited edition of 100 and are numbered and signed! So it’s not so much a tea towel as a bona fide piece of art, which means that we couldn’t possibly use it for drying dishes… and anything that means we don’t have to dry dishes is A Good Thing!

PS Sorry – they are sold out!